For a while now I’ve been wrestling with writing online. Ever since I stopped writing MillennialEvangelical.com, I’ve struggled a bit with what to write. What’s my niche? Do I have one? Does it matter?

I’ve written the “Content Made Simple” newsletter for nearly four years now. It’s a weekly newsletter about social media trends and strategy….among other things. About 700 people receive that every week, and I understand that it’s helpful for a lot of folks. I want to write a lot more about social media strategy and trends.

…But I just have a hard time motivating myself to write here at this blog.

I’ve really struggled with writing generally. I love doing it, but about what? For what purpose? I don’t care about people knowing me. I don’t care about getting as many views as possible. Writing with a prompt is easy. Writing for various outlets that ask me to write and give me some direction is fun.

But, investing hours of time into a free blog just isn’t it for me anymore. It doesn’t really seem worth it.

So I decided this weekend to move any writing I do behind a paywall through Substack.

Honestly? Part of the reason I struggle to write is because I don’t want to give away my writing for free to the few hundred people who may read it.

As an example, right now, I can earn $250 for writing a column for a website. It’s a blessing! I’m grateful. This sort of professional writing pays real bills.

…It also makes it a little hard to motivate myself to write for free on my blog. If I’m going to be honest.

If I’m going to take an hour or two or longer to write a piece of content, I’d rather 10 people read it and pay to read it than 100 people read it for free and move on with their lives.

Also, I think that when people pay for things, they value them more. I get more out of my New York Times paid subscription than just about any free content I read anywhere. I think part of the reason for that is that I pay for it and I value it more.

I think that what I write is worth a small fee, especially the social media strategy content. So I think it’s time that I start acting like it’s worth something.

I also think this will lead to less tweeting about trends and strategy. I plan to move most of that behind the paywall too. I won’t be abandoning Twitter or anything like that. But I do think most of my commentary on social/internet trends will move from Twitter to Terms of Service as well.

Once upon a time, if you wrote a personal blog like this one, you could grow a nice readership. Those early days of blogging were great.

These days, most personal blogs amount to little more than noise on social media timelines. It feels harder than ever to make a real impact.

Today, the content world is just a bit different. The massive amount of time investment needed to get a personal blog like this off of the ground just isn’t worth it. At least not to me.

Few people read when I write content here, and the feedback I get is minimal. Like I said above, I think I would rather have a devoted group of 10 people paying to read what I write, engaging with it, than 100 people reading what I write and never hearing from them again.

I don’t really expect the paid readership format to work. But I am willing to experiment with it and see what happens.

How Much Does It Cost?

My weekly “Content Made Simple” email will continue to be free as part of the Terms of Service project (you can also subscribe to that for free at the link above). It will be delivered through Substack, totally free to anyone who wants to subscribe. All other content will be behind the paywall, visible on the site and delivered via email whenever anything new is published.

I am currently planning to write two posts per week, in addition to my weekly free newsletter. The content will vary between social media/online content strategy and commentary on social media trends. I plan on writing more posts like this or this or this.

This is my plan, for now:

I want to give this a try for a year or so, hopefully. If no one subscribes, so be it. I’ll hang up the keyboard, and we’ll call it a day.

Thanks for reading, and perhaps I’ll see a few of you over on Terms of Service.

END_OF_DOCUMENT_TOKEN_TO_BE_REPLACED

Some have speculated that there could be an impending social media exodus. Many books, Christian and not, have been written recently about pulling back from phone use, curtailing social media activity, and other like themes. I have read many of these books and have changed some of my own habits. They are super helpful.

However, the publishing of books about the perils of social media and increasing negative sentiment regarding social media do not mean there will be an exodus from social media anytime soon. Just look at Facebook. Despite an apocalyptic year full of terrible stories about privacy violations and poor content moderation, their usage remained stable.

The last few springs, Pew Research Center has published new data on social media usage in the United States. This year’s data came out just last week. I wanted to write on it right away, but I was preparing for a long weekend vacation in NYC and had to prep my workload for that.

Finally got some time to look at the data this week. Let’s look at five of the biggest trends revealed in the data.

1. YouTube is the biggest social media platform in the world.

…but most people don’t see it as a social media platform.

You may read that YouTube is the biggest social media platform in the world and think, “Wait a second. YouTube isn’t social media. It’s just a place to post videos.”

YouTube is a social media platform. Countless hours of video are posted every day and millions of people are watching and commenting on those videos. Media is posted and social interaction happens around that media.

The survey says 73% of Americans use YouTube, and 51% of those people use it every day.

However, despite the constant bugaboos that hound Facebook—whether it be how they use our data or the kind of content they allow on their platform—its usage remains steady among American adults.

Obviously, Facebook would like to see a growth in the usage of its platform among Americans, but considering the year it’s had, maintaining its usage percentage isn’t the worst thing to happen.

This was probably the craziest stat out of the whole study from my perspective:

I am 28-years-old, and I am shocked that there is such a disparity between my age group and the folks just a few years younger than me. The disparity is pretty stunning. I mean, 25-29- and 30-49-year-olds have more in common when it comes to Instagram usage!

But at the same time, when you take time to think about it, it really isn’t very surprising. Consider the two age groups and how different those times in life are for Americans. One group is largely in college while the other is out in the “real world.”

4. Facebook is the most popular social media platform among senior adults.

…I mean…is anyone really surprised?

According to the survey, 46% of Americans 65+ use Facebook. YouTube comes in second at 38%. I believe Facebook is most popular among seniors for a number of reasons, but primarily because it was the first social media platform that pervaded senior adult culture and because, for many of them, Facebook is all about connecting with people from the past, like Classmates.com used to be.

If you only looked at that statistic, you would be tempted to think that Facebook will die when its users do—so many people on Facebook seem older. But the most prolific users of Facebook are actually the 25-29-year-old demographic, as 84% of them use Facebook.

But this isn’t super surprising. Why? 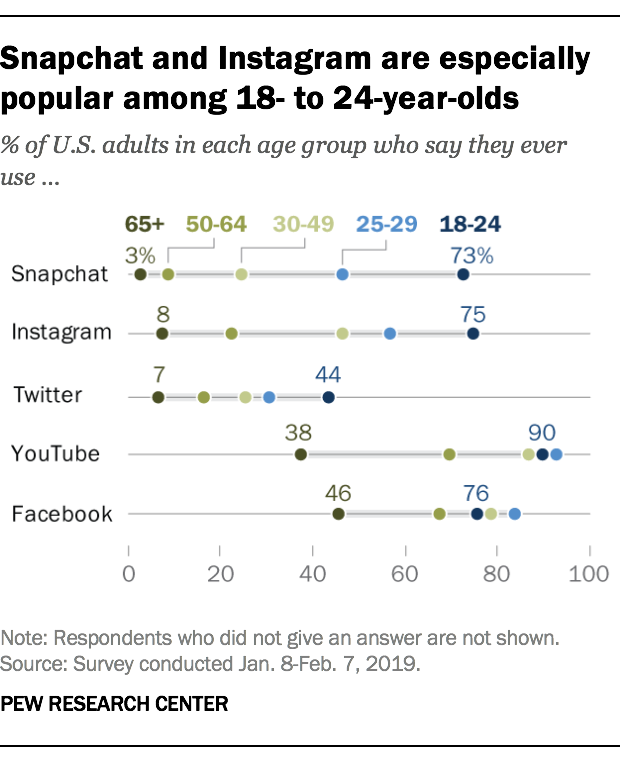 Is there a trend here? Is it possible that whichever social media platform came into the lives of Americans in their adolescent years is the one most likely to stick with them into post-college adulthood? I think there is a case for that. I think it is more likely that today’s college students stick with Instagram for a long time rather than migrate to Facebook as they get older. But who knows? Time will tell. Facebook is technically more prevalent than Instagram among 18-24-year-olds right now (76% versus 75%), but if you know any college students, you know that they actually use Instagram much more than Facebook.

5. There are more Americans who use LinkedIn than use Twitter.

When you see super “woke” people on Twitter raging about why the latest “problematic” movie star deserves to be “canceled” because of something they said in a text message 10 years ago, remember just 24% of Americans are even on that platform and an even smaller percentage is paying any attention.

Twitter is home to some of the loudest social media activism, and yet it has fewer users than the corporate social media platform that spams emails every day.

I love Twitter, but its influence on our overall culture is overstated, despite the fact that the leader of the free world uses it as his primary communication platform.

All of this is to say: social media isn’t going anywhere anytime soon. It will change in the next decade. Some people will opt out of social media. Some will limit their usage of these platforms (I know I have). But if social media survived the incessant bad news about Facebook and YouTube this year, it can survive just about anything.

The task for us is to learn how to use it wisely. It isn’t going away. Just look at how 2020 candidates are already using it.

Daydreaming about what “a world without social media looks like” steals valuable time away from learning to live in a world in which we are governed through it.